It’s a little late to try convincing you I don’t like this app after 14,168 check ins. Clearly it plays on my user loyalty. 😀 So why quit? 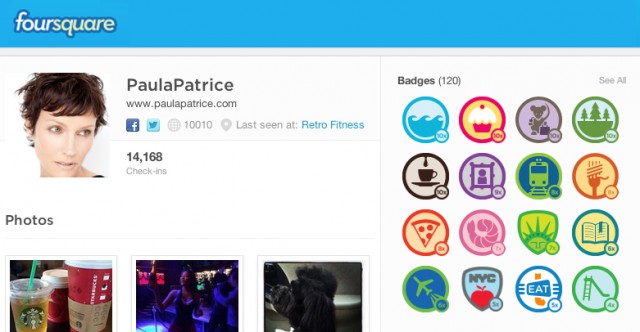 Foursquare’s developers have made a series of moves that made me lose interest. Me, Miss 14k. If I’ve lost interest, I’m sure the 2ks quit long ago.

So what were the dealbreakers?

1- The “game” of Foursquare became a secondary feature. The original appeal for me was competition – against my friends for points, to grab mayorships, badges, and even against myself. I enjoyed trying to remember where my past check ins were and check in consistently (like the game Concentration) in order to gain the Mayorship, if even on a drive-by.

2- They changed the UI to become unusable. Then changed it again, and again, and again. A checkin was two clicks, then one click, then two forward and one back… I can’t adopt a product if it’s fluid.

3- There’s one big “search” field, and I have no idea what it searches. It’s useless. I’ve tried it a few times to find the nearest Starbucks, seafood restaurant, parking lot, Foursquare friends… I can be in front of a restaurant and it isn’t suggested to me when I search “restaurants.”

4- This “social media” stream is anything but social. There is very little interactivity or engagement with friends. There’s a “heart this” & “leave comment” button. Whoopeedoo.

Where is the value for me, Foursquare developers? I’m your early adopter, your power user. Who is this core user that you are trying to engage by changing the UI as often as you change your undies?

I believe there is plenty of room left for more social media streams in the cyber world. I’d love to see something new, where I can engage in a new way with a new network. But Foursquare won’t be it; no, it’ll merely be a button that you hit when you want to add a location to your Instagram check ins.

Foursquare is an afterthought because they made themselves one. #EpicFail