The Editor Who Preceded “50 Shades Of Grey”

HGB, the woman who needed no more than an acronym, died today. She was an icon, a force in magazine publishing, women’s liberties and a restorer of self confidence.

It’s because of Helen Gurley Brown that books like 50 Shades of Grey can go mainstream in our market and Carrie Bradshaw is a single, successful, sexy city gal. Prior to the voice HGB gave women in the media, we were all emptionally-suppressed housewives living in Post-WWII conservatism chiefly concerned with ironing our husband’s underpants and minding our dinner party etiquette. 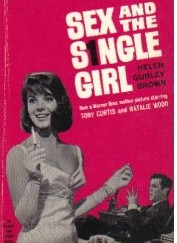 The longtime editor of Cosmopolitan Magazine who invited millions of women to join the sexual revolution died at age 90.  She was a trailblazer, one of the most influential 20th century feminists. Her book is a compelling look into how far we’ve come in our feminine liberties, and as Brown went on to become editor-in-chief at Cosmopolitan Magazine she put women in touch with themselves thanks to articles like “10 Ways To Turn Down The Boss”. If the book is too much of a time investment, at least click through to order the movie.

At the beginning of her media career, which began with the 1962 book “Sex and the Single Girl”, HGB said that her aim was to tell a reader “how to get everything out of life — the money, recognition, success, men, prestige, authority, dignity — whatever she is looking at through the glass her nose is pressed against.”

RIP HGB, you left an indelible mark on the world…
and a big smudge on the glass.

« No Self Loathing
Tell The World Your News! »