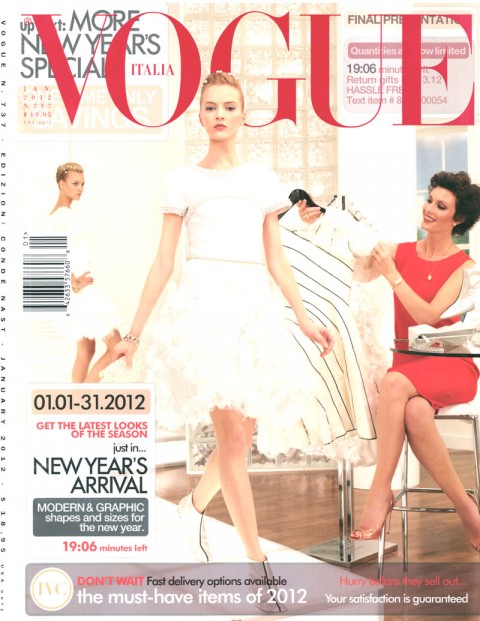 A Google search for “Vogue Lady In Red” can bring you up to speed on the conspiracy theories surrounding my inclusion in this otherwise-übercool editorial featuring Daria Strokous and Caroline Trentini.
Has Steven Meisel lost his mind? No, I’m pretty sure he’s just exercising his sense of humor!

I find this editorial to be brilliantly conceived and flawlessly executed. Working with Steven Meisel was an honor; I love that he allowed me to be myself without trying to “cool me up” and I am proud to have a role in the creation of his art.

Re: The Story:
The women who patronize teleshopping channels save up for that $300 gold pleather jacket payable in 3 Easy-Pay installments because for them, it is their Christian Lacroix. Teleshopping carries everything from frumpy knits to “designer” goods, making the higher priced designer items the equivalent of a middle-America Chanel.
Fashion is subjective; your cool may not be my cool. Real women from Texas to Tuscany covet clothing that they can wear in their everyday lives, inspired by haute couture runways but made wearable by mass market designers. It’s the trickle-down effect from runway to ready-to-wear to private label.

Re: The Casting:
I think Steven again makes a statement. Watching Joan Rivers on QVC, she overshadows her guests, the models and the merchandise. It’s the Joan Show and the customers call in talk as much about the merchandise as they do about being a Joan Groupie. The personalities of the tele-hosts are as important as, if not more important than, the models because they represent the lifestyle, they sell the lifestyle that the customer calling in wants to experience. How else would a size XXXL polyester-blend blouse modeled by a size XXS model fly off the virtual shelves of the tv screen if not glammed up by an overly-sexified tele-hostess?

Even the runway models are a parody in this editorial, the type of model that would never be used for this purpose, wearing clothing that would never be sold to illustrate the point that teleshopping is about what customers PERCEIVE, not what they see. I think this irony will become clearer when we see the rest of the cast of characters on the inner pages of the editorial.

My interpretation of Steven Meisel’s QVC editorial is that it represents the diversities of the fashion ecosystem + the micro-celebrity world that teleshopping channels create. Or, he thought it was funny.

Re: The Lady In Red:
I left Marilyn Agency in Paris early in my career to pursue a consumer-fashion path in NYC because those were the “cool brands” I related to, as do 90% of the women in the USA. I love fashion and I marvel at high fashion models like Daria Strokous and Caroline Trentini, at the heights of their editorial careers. I am the woman looking at the tv, in awe of the lifestyle those models are selling, ready to dial in and buy it – and therein lies the point of the story for me: I’m in awe of them, other women are in awe of me, and other women are in awe of those women… It’s the ecosystem of fashion diversity, everybody is inspired by somebody. BTW: Red is my Aries color.

View the entire editorial and a behind-the-scenes video on the Vogue Italia website .