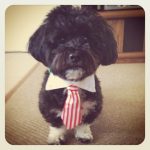 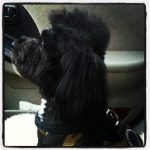 Milo Is Insured. Is Your Pet?

♥ INSURE YOUR PET NOW. YOU’RE JUST A CLICK AWAY ♥

Milo & I were playing ball on this beautiful Fall Sunday when we heard the terrible sound of a car crash as it drove up the street that splits the school park from the playground. A dog owner began frantically running towards the street yelling for her dog. On instinct, her golden labrador struggled to roll to its feet and get out of the road, getting one good limp in before collapsing on the grassy curb. He’d been hit.

As I write this I cry. That poor, beautiful animal. Humans were to blame.

He hadn’t done anything wrong. He was excited to be out on a sunny day with his sibling; they were two golden labs, maybe three or four years old. They didn’t know the park bordered a street that was preceded by a blind curve. They couldn’t leash themselves. A dog’s instinct is to run, to be a pack animal, and when these dogs saw others across the park they ran to join the dog party.

Like any “parent” it’s the responsibility of the owner to keep innocent “children” away from roads, away from danger, and if an animal is mere feet from a busy street, on a leash. We’re the humans, the ones who need to exercise common sense. In this case, one dog made it across, the other did not. The trauma of witnessing this owner’s negligence is not minimized by the fact that neither the car owner, bystanders nor other dogs were hurt. I’m sure the dog owner regretted that moment of distraction, and it serves as a reminder of our responsibilities as pet owners.

I called 9-1-1. The police transported the dog to a hospital, the driver of the car took off. I’m left hoping that the pet owner has insurance, because injuries like this cost upwards of $3000 just for the initial treatment. A stay in the hospital runs $2500/night. I hope that dog gets the best medical care available to save him.

I hugged Milo as he whimpered at the scene, thankful that should we have an emergency Milo is covered by a comprehensive health insurance policy.

As I shared in this 2008 blog post, when Garren Salon celebrity colorist Christopher John worked on a L’Oreal shoot with me his dog was sick and in the hospital. His dog was uninsured, costing $2000 per day, and Christopher was struggling with his emotions, naturally wanting to keep his beloved baby around as long as possible, but needing to be realistic about his pet’s chances of recovery.  It was then that I researched all of the pet insurance companies and selected Embrace. They’ve been wonderful. If you don’t use the insurance your pet gets an annual rebate, lowering the premium for the next year. They are real people who return my emails, answer the phone and advise me on claims.

Embrace Pet Insurance costs me around $300/year and has historically reimbursed me between $500-5000 each year for my high-maintenance dog. Do the math- that’s a solid investment. Get your pet covered the moment you bring them home to avoid any conditions being deemed as “pre-existing.”

Hug your pet knowing you’ll never need to make a life-or-death decision based on how much money is in your wallet. Spread the word. Share this article. Use the link below and Embrace will donate $25 to a pet charity.

« On Trend: The Fall Face
7 Bad Behaviors That Will Get You Fired By Your Agent »